Our definition of dyslexia: 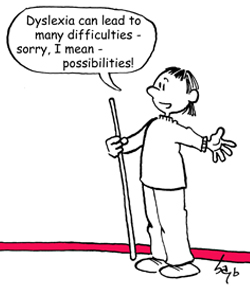 Dyslexia is a problem with the automation of language. Dyslexics have to a greater or lesser extent difficulty with fluent, accurate reading and spelling of language, and with the smooth articulation of their thoughts in writing or speaking.

Both in oral and written communication dyslexics have difficulty in structuring their story and telling it from start to finish.

Dyslexia is the direct result of the dominance of, or a strong preference for, using the right hemisphere of the brain for thinking and processing information. Probably this structural arrangement is also combined with a natural, inborn weakness for processing language codes as a feature of the left hemisphere, because some other finely detailed tasks seem to be within the normal range.

This result in a way of thinking and learning we call 'conceptual thinking' (also known as picture thinking or image thinking). We think dyslexia is a natural variation in the distribution of qualities among various people. This different way of thinking is also familiar to people with AD(H)D, dyscalculia, autism, PDD-NOS and being highly gifted. In addition it is the basis for many talents.

As a result of this weakness in processing language fear of failure inevitably develops. Fear of failure slows down or turns off the non-dominant hemisphere. For dyslexics that means the left hemisphere, the one that is best suited to the processing of language. So, under pressure and stress, language processing is turned off in the brains of dyslexics, which ten worsens the already existing dyslexia.

We also do not believe that you have a disorder, but that you belong to a minority - a minority, just like left handers or red heads! A minority that thinks and perceives differently and hence casts a very different eye on the world – and a perspective that is desperately needed at this time.

Do I have dyslexia?

The career of an adult with dyslexia is characterized by a series of trainings in order to reach wherever they are currently, or missing out on promotions whilst they know that they have it in them, but do not dare or are overtaken by colleagues who can present their ideas better.

Are you familiar with the sense that you knew something was amiss, but probably thought you must work harder or that you have a weak character? Perhaps you were told that you were stupid and that you had to make do with that? Of have you worked hard your whole life, are you often tired and have little energy over for the nicer things of life? All of this may be indications of having dyslexia.

Listen to the story of Patricia:

Patricia speaks different languages and it took her a while before she realised it's not because of her multilingualism that she had so many problems with dyslexia, but that being dyslexic is about speaking a different language then linear thinkers! 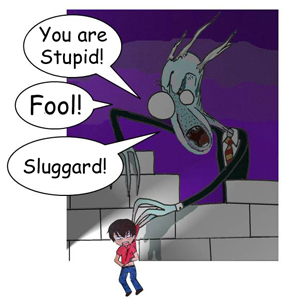 School is frequently a cause of fear of failure in dyslexics, although this is unintentional and happens despite intensive support from teachers. Many people are bothered by this long afterwards!

More information on fear of failure

Chapters 2, 3 and 4 of our book "Move forward with Dyslexia"explain exactly what dyslexia is. Available in Kindle edition and paperback!

Read parts of the book:

Click on this link of Amazon and read the first few pages and chapter one of our book.